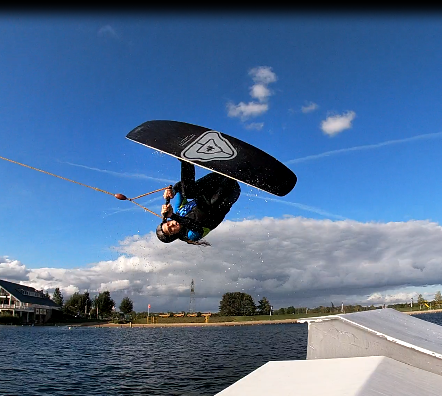 In my free time I like to spend my time doing sports outdoors. Twice a week I go wakeboarding at my favourite cable park -- at least during summer time, winters are a bit chilly in the Netherlands. I love the sport because it is outdoors and in the water, and there is always the next trick to learn. Well, actually, the sport is on the water if you are doing it right. However, the good thing is that I crash in the water more than enough when learning a new trick, so lots of time to be in the water, too. Last but not least, riders always take it easy so the atmosphere is always relaxed. No hurries.

If the winds are strong, I trade my wakeboard for a windsurfing board and occasionally a sailing boat. Just free-riding.

Now, you might wonder, summers don't take all year, so what's up during winters? In winters, I like to go running. I prefer endurance trainings over speed/interval trainings. In April 2018, I completed the 50th edition of the Enschede Marathon in a solid 4hr20min. To be fair, I had a faster time in mind, but it was quite hot that day (28 centigrade) which slowed me down. I should have gone wakeboarding that day...

Then there is breakdancing (also called breaking or b-boying/b-girling). I only know the basics. I started when I was 30 -- which is at least 22 years too late -- and breaking is by far the most difficult thing (of the things that are not impossible) I have ever tried. But I find it a lot of fun. Thanks in a large extent to the very nice classes I got at On The One (previously known as RuggedStudio) in Eindhoven. I now try to do a bit of breaking every day at home, in my dancing chamber (a fancy word for just an empty).

Next to sport, I really like to play board games, especially cooperative games. My current favourite is Magic Maze. I really like the fact that it is a real-time game, meaning that all players move simultaneously, and that no other communication is allowed than moving the pawns. One of my all-time favourites is Forbidden Desert. This is another cooperative game, which, in my opinion is really well-balanced. First of all, there is not a single strategy that works for every situation so you have to stay creative. Plus, the randomness of the game is simply just right. It is sufficient to get different scenarios at every play, but it is not that high that it drastically influences the difficulty of the game.

And, most importantly, as of October 2019 I like to spend my time the best with my cute little daughter, Jara.